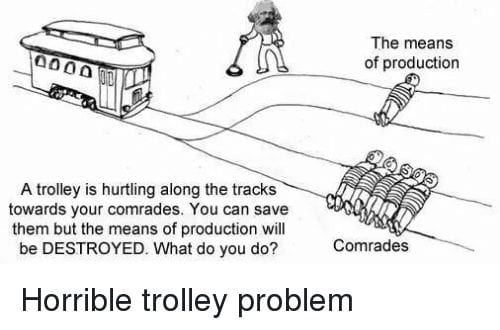 More often than not, ethical issues – in financial areas or other walks of life – are not totally black-and-white. What’s ethical from my point of view, might be outrageous in your opinion and vice-a-versa. However, most of us generally tend to paint things with a broad brush and conveniently ignore all lines of thought that do not match our personal yardstick of what’s “ethical”.

On this subject, here is some food for thought.

There is this particular problem of a railway trolley which is pretty popular among people who study ethics and/or philosophy. It’s not a financial problem as such, but I am sure that such situations arise in the financial world where we (I am including myself here) are quick to judge other people about their ethical (or unethical) behavior. A problem like the one described below has the potential to make us think twice before we become too judgmental. There are numerous versions of the problem, but I will choose just two to make a point.

Think over it for a while.

In both cases, there is a cost of action (you will kill someone) and there is also a cost of inaction (again, someone will get killed). Would you try and change the fate of the single person who is not really destined to die, in exchange for the life of other 5? What’s more ethical (or moral)? Do you think Case 1 deserves a different ethical consideration than Case 2?

Also, spend a moment on the mind-games that will result if you change the situation even slightly. For example, instead of 1 person on the other track, what if there were 3? or perhaps even 4? Would you kill 3 or 4 to save 5?

Discuss this with your family and friends and see how their responses differ from each other.

Sometimes, it takes a paradigm shift in your thinking to address many ethical/moral problems (financial or otherwise) – a rigid definition of “ethical” just won’t fit the bill.